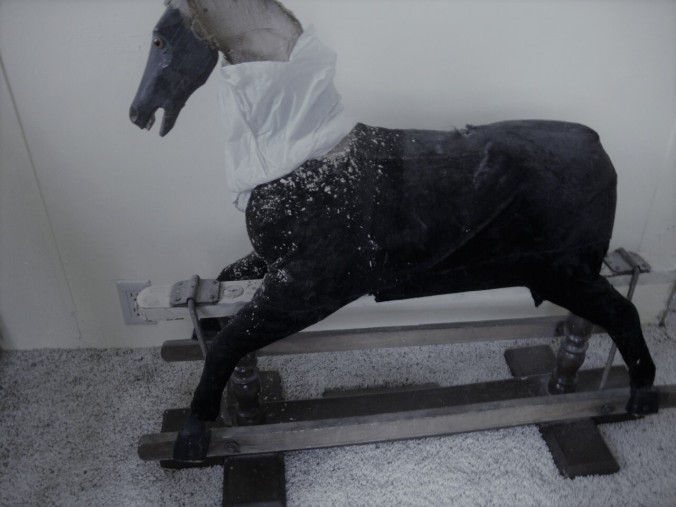 This is part 6 in a six part series on decluttering.

When I was 5, my Mom and I visited an old rummage shop in the next town.  Actually it was a called a junk shop, which was not a bad term to use at the time, just descriptive.

The man who owned the place was named Heimie, and he always smelled like grease, sweat and cigarettes. We would visit him once every month or so.  The place had concrete steps and a slanted wood floor.  Things were stuffed everywhere.  There were wagon wheels hanging from the walls, big barrels of nails and screws. In the aisle, rusty machine parts would be stacked next to china. Mom would rummage around the shop and always walk away with something: a tea cup, a meat grinder, a piece to fix the washing machine, or maybe a tablecloth for her bridge table. Anything and everything was up for grabs.  My Mom and Heimie would chat amicably.  There was never a sales pitch, just conversation.

My Mom was a horse woman. She drove harness horses in races when she was in her late teens.  She loved horses. So when one day at the shop she spotted this chewed up rocking horse glider from the 1920’s, she was entranced. She bought it and brought it home, all the while telling me stories about how she had one similar when she was little. It had a wooden face, legs and gliding  stand, but the body was stuffed burlap that was covered in hide. It was moldy and some of the stuffing was falling out, but she was enthralled with it. She vowed to restore it to it’s former glory and give it pride of place in our living room.  My Dad was skeptical, but didn’t say anything except that perhaps it should be kept in the garage until she had gotten supplies for the project together.  Mom ignored Dad’s idea and brought into the house.

That was when our German Short Haired Pointer dog, Belle, saw it and decided to take a nibble off of the hide. She actually took a rather large nibble.  Mom was in the kitchen when she heard the tearing sound. By the time she got to the living room, most of the hide was gone, and there were bit of stuffing hanging from Belle’s mouth.

Mom yelled and chased Belle out of the house.

And then she found some black velvet and covered the stuffing and hide. She hand stitched it place, put it in the garage, and there it sat until we moved, 8 years later.

With each move we made, the horse went with us, back into a garage, or storage room.  It was never repaired and never gotten rid of. It had no purpose.  It just … stayed.

I know Mom felt like the dog had taken a piece of her childhood. But she also didn’t know what to do with the horse.  She felt she would care for it best, I think, by protecting it from more damage.

It was a nice dream, but it was Mom’s dream, not mine.

Every time I saw that rocking horse, I felt guilty.

Guilty, because I felt I had broken a promise.

Guilty, because that horse should be restored, and not just stored.

Guilty, because although I liked the horse, I was not attached to it personally, and really didn’t want it in the house.

Even  years, after I went through every sentimental item I owned, I still kept that horse. I would tell Greg, that I would fix it up and sell it, someday. But every time I saw that horse, I felt sad.

A few weeks ago, I sold that horse. I never repaired it. I just sold it.

And I feel so much better!

When I was doing my sentimental items 3 years ago, like everyone, I struggled with it. I did the photos first. That, for me was a good choice.  I saved the photos that made me smile, I immediately tossed anything that brought back a bad memory, or we had way to many duplicates of, that were out of focus, or just didn’t mean a whole lot to me.  I set the keepers aside to wait until I was ready to organize. The non keepers, I tossed. I know some people cringe at the thought of throwing out photos, but not every picture was a cherished memory. I refused to memorialize things or people I didn’t like, just because I had a picture.

It took me 3 passes to slowly get the sentimentals done.  They used to be in two antique trunks.  I still have the trunks, because I love them.  But they store other things now, like my sewing fabrics and winter blankets. They are polished and loved.

There were a lot of small things. Some things I kept for various craft projects, so they are in a cabinet with little drawers on a wall above my craft table.  I use them frequently.

I ended up with “my reasoning” for keeping a sentimental item. I guess it takes Marie Kondo’s “joy sparking” criteria up another notch.  I’ve mentioned this list before, but I’ll share it again.  The first two are Kon-Mari no brainers, but the rest really helped me to really figure my sentimental things out.

I asked: Does it spark joy?   I opened the trunk and asked myself the following:  Is there a way to use this item?  Will it or does it add value to my life in the “now?”  Does it have any other lessons to teach me? Do I just love it just because? Do I love it enough to actually give it a home and not just stick in a trunk to be forgotten? Does it make me smile? Only when I was satisfied with the answers, did I move it to the keep, trash, or donate piles.

I gave each item I kept, a home.  Truthfully, this was the hardest part, for me, about  keeping a sentimental item.  I had to really change my habits here.  Standard procedure in my mind was to tuck sentimental things safely in the trunk.  Now, I had to find a place, a special place, just for this item to live and flourish.

I had to use the item.  If it was decorative, that was easy. It’s job was to make me smile.  There was a limit though to how many just pretty things I could logically keep.  My house is small, so there is only so much available space. If it was a dish, I had to use it, maybe as a fruit bowl, or  a catch all for keys, but it had to have a purpose. If it was a paper or document, I had to actually need the item.  Pictures were all scanned and copied to a few flash drives.  But I also loaded them on my computer so they would randomly pop up daily.  I have  seen these pictures more in the last year and a half, then I have during the rest of my lifetime. I often use some of them in my blog. They make me smile and bring back wonderful memories.

When the time was right, I needed to let it go. Every possession is a tool of some sort. And as we grow, some tools are just no longer needed anymore. When a tool breaks, we replace it. We let it go.

Being able to actively manage my sentimental things has been life changing.  My biggest takeaway is that my memories of special times in my life are so much more vivid now.  I didn’t need a letter, or a keepsake to hold the memory.  As I used these lovely, sentimental things, the memories stood on their own. After a while, the object’s purpose in my life evolved, and I happily let them go.

The biggest thing to me, about any sentimental item, was that it had to make me smile.  There is a big difference between true sentiment and other feelings, like guilt.  True sentiment is a happy thing.  Yes, it can be bittersweet, but it will never make you just feel bad.

If you keep something because you would feel bad, or guilty because someone else would be displeased, then that isn’t sentiment.

If you keep something because you feel  you “should,” for any reason, then that isn’t true sentiment either.

That horse stayed our family for 50 years. It didn’t stay because it brought my Mom joy. It didn’t stay because it gave my Mom wonderful remembrances of her childhood.  It didn’t move to my house because it brought me joy. It stayed because we felt guilty about it’s physical state.  We both had good intentions for it’s future, but not because we would keep it after it was fixed. Mom gave it to me, not because she knew it would bring me joy, but because she wanted to get rid of her guilt, and she hoped I would restore it. But all it brought me was a sense of sadness and failure.

Now that it’s gone to a new home, I feel joy.  The funny thing is that now that it’s gone, my memories of my trips with Mom to the junk shop are back in my memory bank. They are fresh and new again.

All of the sentimentals that I now have fit into that list I’ve made.  I know others with probably go sometime as well, when the time is right.

The was to be the last post in my Emotions of Stuff series, but I’ve decided to add one more, tomorrow,  just to summarize the things I learned about my emotions with my belongings.  Thanks for reading.

One thought on “The Emotions of Stuff: The Sentimental Things”