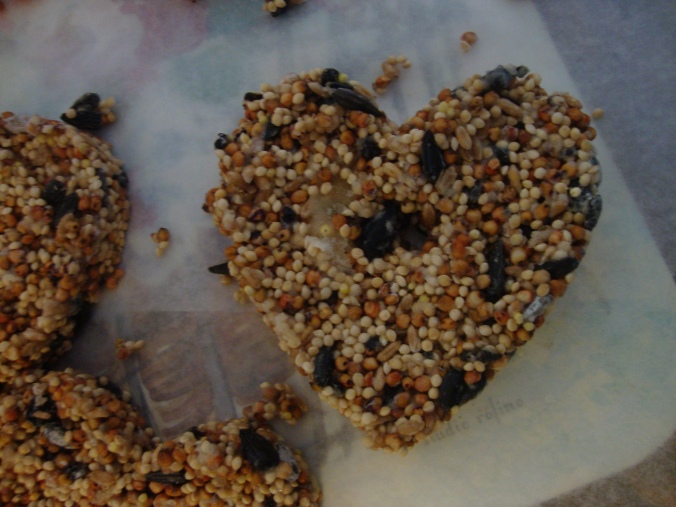 I was looking for a simple, and yes, “cheap” favor to give out at the Arboretum Love Stories tour. Since it was close Valentine’s Day, I had thought about  giving a card of some sort to each of tour-goers.  The tours are free and it’s the Arboretum’s way of bringing folks into the garden experience.

I found these really cute birdseed hearts at:  http://www.intimateweddings.com/blog/birdseed-wedding-favor-hearts-easy-and-inexpensive-diy/

They were cheap to make, and simple. I gave out a bunch at the tour, after I had tried them out on the birds in my yard.

The water and flour I had on hand, as well as the corn syrup, so the only thing I had to get for the mixture, were the gelatin packets. I bought a bulk box for 4.99.  I also didn’t have a cookie cutter heart. I picked one up for 50 cents.  I could have made one from a tuna can, but I wasn’t that ambitious.  Anyway, all totaled I spent $12.49 on my project, with more than  6 pounds of birdseed left over for the wildlife in my yard.

I did change one thing on the recipe.  The recipe just combined the water, gelatin, flour and corn syrup all at one time. To my way of thinking that would just make the mixture lumpy, and  the gelatin wouldn’t dissolve.  The recipe also just called for water, not hot water. I decided to boil the water, then dissolve the gelatin first, before adding the corn syrup, and lastly the flour. I mixed it well after each addition.  Last step was adding the birdseed.  This worked really well.  The mixture was easy to handle and the hearts set up and dried pretty fast.

The tour-goers like the project,  so I might do it again for different holidays, using different cutters.

If you are looking for simple project to do, this was fun.  It was a little messy, but clean up was easy. 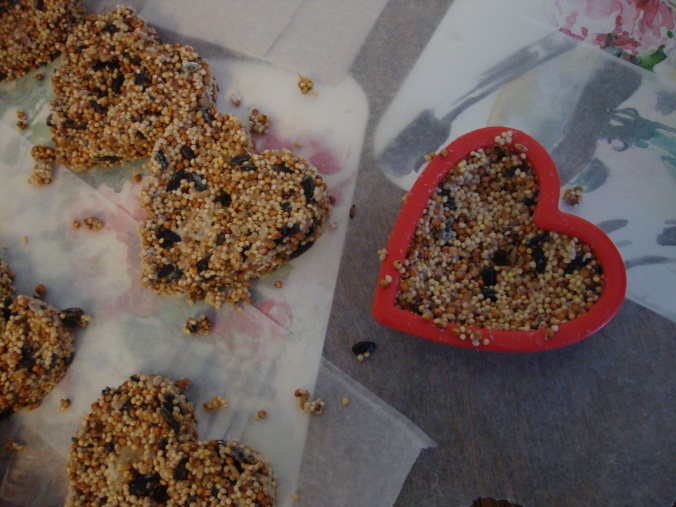