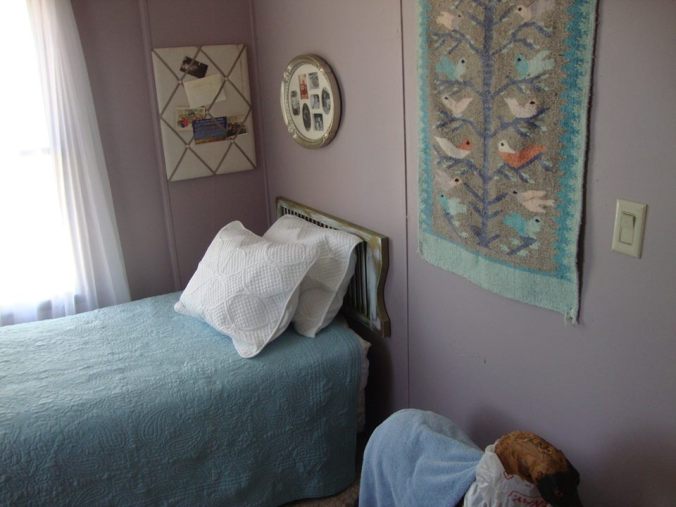 I’m going back a couple of years here.

When topics come up my facebook KonMari Tidying group that everyone seems to struggle with, I can’t help but add my two cents worth. And since it’s Spring, and I’m freshening up my home, the topic of purging the little things, seems timely.

One of the hardest parts of tidying and decluttering my home was dealing with the small stuff. For me, clothing wasn’t too hard to do. Neither books nor papers slowed me down. Granted, they were tedious to do and time consuming, but not really stressful. Going through kitchen komono, was not bad either. I liked to cook, but not doing dishes, so the fewer the better, for me. No, where I really stalled out and got stuck big time, was all of the little stuff hidden in my office/ craft room/guest room. This is a small 8’ x 11’ room, but it had by far the most amount of stuff packed in it. I had tons of cubbies for my bits and bobs. Each container held several junk drawers worth of stuff. Little stuff, pens, chargers, scraps of paper, miniatures of toys, fabric, buttons, assorted craft projects that I would never do. There were things that were gifted to me. and tons of wrapping paper from the after Christmas sales. It overwhelmed me when I looked at it. I can name quite a few times where I just walked out of the room, shut the door and cried. I went back and re-read The Life Changing-Magic of Tidying Up, over and over, hoping to find a way to get past this stuckness. I was feeling like a failure, trapped in a place I hated. I was angry at the world, and it was all because I was trapped by these little bits of junk that I thought I loved.

I stayed stuck for awhile. I wish I could say differently, that I just strode back into that room and became a tidying queen and that spit spot, it was done. But I didn’t. I had an old-fashioned temper tantrum, followed by a long pity party, and several rounds of “poor me.” Not very classy, huh?

The small stuff, for me was worse than going through my sentimentals. I could say yay or nay to a photograph in a blink of an eye, but give me a hand full of pens, and I froze. I had tons of storage ideas, but how would I make it all fit? What should really go? I needed to come up with a way to move forward, before I gave up completely.

I went back to my “Getting Unstuck Plan”. Basically, it’s my personal way of figuring how to get out of a stall or a dead stop and get moving. It contains the following thoughts, and they all revolve around having a vision plan:

What is my plan?
Is it still current with what I’m doing “now” or has something changed?
Do I have a really clear picture of what I am doing “now’?”
What is the role “ in the now” of these items I am sorting, or projects I’m doing?
Am I saving anything “just in case?”
Am I purging or organizing?
If it’s decorative thing I keeping, will I commit to giving it a home.

I used this formula in a post on sentimentals ( don’t worry, I followed the proper order of categories in the book, and did sentimentals last), and I use it alot for non-tidying projects, as well. It took awhile, but also worked for my small stuff.

As I went down the list, mentally asking and answering my questions, I finally hit on the the crux of the problem.

I was organizing, not purging, and I was keeping a lot of just in case stuff.

I thought I was purging, but mixed in the middle of it were under lying thoughts of where it was all going to go. Having that mixed up mindset was what was really stalling me out. Everytime I decided to keep an item, my next thought was ” How am I going to store it?” I had so much stuff, that I couldn’t see how I would fit it all in this room.

So instead, I went back to the method – Sort by catagories; Decide if it truly sparks joy or is useful; Put it in a keep pile, or thank it and say goodbye; then, after all was said and done, organize it

Sort by categories: I went macro thinking first: sewing, drawing, crafting, computer stuff, photography, and guest room. Then I broke down each category a little farther, if it made sense. Sewing and crafting got broken down, but I didn’t have a lot of computer stuff or camera stuff, or even guest stuff, so those stayed at the single category stage.

Does it spark joy or is it useful?: This is where having that vision at the forefront in my mind made a huge difference. Because certain crafting projects were just pipe dreams, and not true joy sparkers, I was now able to put them in the to go pile. I tried to really hone in on what kind of joy I was feeling. There is a huge difference between an overwhelming feeling of joy, and a feeling of “okay.” If I didn’t smile inside when I held it, I let it go. So many of my projects were just in case things. In my heart of hearts I knew I was never going to do them. Things that were too small … like little figurines or stickers, were put with similar others things into a baggie before going in the donation pile. I did the same thing for like things that I was keeping, as well. Because they were contained, it appealed to the organizer in me, without actually organizing them.

Put it in a keep pile: Even though I wasn’t organizing at this point, I did keep each category together in the room. It may still have looked like piles of junk, but it was purged. I still found myself wanting to stop and organize. I had to bite my toungue and rethink my vision. Eventually, I resorted to putting up a piece of paper on the wall with my vision written on it.

Thank it and say goodbye: I can’t stress this part enough. For myself, I found that when I was stuggling to let go of something that I knew in my heart I didn’t want (like those great projects), reminding myself that they had taught me something important, like that I admired other people’s creativity, or that I tended to overload my schedule with good intentions. Whatever it was, once I acknowleged it, letting it go was so much easier. I also became more grateful for those items I was keeping.

When you are done purging, organize it: It’s funny, but all of that fear about how to store what I chose to keep, was gone when I got to this point. There wasn’t nearly as much as I thought there would be left, after the purge. My little guest room held everything effortlessly.

My final takeway about all of this was that when I stuck with my personal vision for my belongings, finding permanent ways to store them was never a problem. I still have empty spaces in the cupboards and around the house. I have extra storage boxes that are empty. I keep them because they are pretty and decorative. We do have some creative storage places for things though. Greg’s beloved RPG books have a home in the bathroom linen closet. He can easily access them there. It is a dry place. Our linens are in a much smaller cupboard where they fit nicely. My fabric storage is a favorite trunk that belonged to my mom. My dresser is stored in the bedroom closet, because my wardrobe is smaller now. All of my crafts went into the closet in the guest room, which left it looking like the picture above.

A peaceful place to tread joyfully.