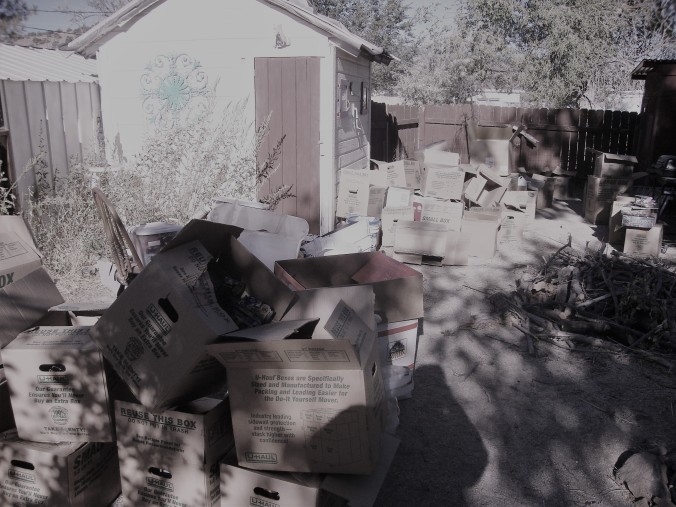 On the outside, the premise for having a storage unit can seem very practical.  For a monthly fee, and short term plan, this can seem like a great way to store your belongings while you travel, while you tidy, or just until you can get the time go through your things.

But things are seldom what they seem.  Life happens and that 6 month plan to get organized and relocate your belongings back to home, just doesn’t happen. My sister had three storage units. One she kept for 23 years, in Reno, the other two she had for about 10 years, in San Jose.  She always planned on emptying the one in Reno.  She had great intentions. But as she got sick she traveled more for pleasure and fun and emptying out a storage unit the size of a master bedroom was not high on the fun list.  In the end the only reason those storage units got emptied was because she had passed away and I had to clean them out.

I probably should add the value of the time I spent, digging through her trash and “treasures”, the cost of having someone haul out the remain to the landfill, the wear and tear on my car, taking items back up to Reno to determine if they were worth what we thought to that total. All told it would be closer to $44,000.

And what was in those storage units that were worth a year’s salary?

Really, there was not very much that we kept.

The large unit in Reno had a large bedroom set, roughly twenty years old, very dated, with lots of scratches and broken parts. There was my nephew’s bassinet, totally filthy and covered in dust because the rubber seal on the roll up door had weathered and cracked.  It was never noticed because no one ever opened the unit after she moved to California. Along with the dust, came the rain also.  Many of the boxes were damp, moldy and musty. But dutifully I went through each box in the hope that something was salvageable. The contents in each of the boxes was mixed, so it was a grab bag of wedding invitations, kids toys,  old clothes, photos,and house wares. In the end, a few things were okay to donate or recycle but the rest was trash. We kept nothing from that storage unit; absolutely nothing.

The two in San Jose yielded a little bit better; but only because the units were newer and a little bit cleaner.  There were a few levels of boxes, but the rest of the room was backed to the top with black yard sized garbage bags. I just about cried when I saw it.  They were so stuffed in there, that when you opened the door they just fell out at you.

In some, bags I actually found money, quarters that my sister was collecting of the various states. I also found some of my nephew’s collectibles, which he wanted. We found a few more things to keep, and found a lot of things we could donate, but nothing else.  I called a junk hauler after that, and paid a good sum of money just to have them come and haul the rest of the contents away.

It was sobering, really.  I was so glad to be finished, but the toll it took on both me and my pocketbook, and out of my life, was exhausting.

When Greg and I got married, I still had a lot of my sister’s stuff at my place.  While I had some empty spaces, Greg had his own house worth of things that he was clearing out.

We did get a storage unit for a lot of things we didn’t have space for yet.  The feeling was that it was temporary. I thought, 6 months at the most.  It ended up being about 2-1/2 years.  And then, it only happened because I forced myself to come to terms with my things.  That, in turn, let us get creative with finding homes for the storage things to live here at the house.

Some of my take aways about storage:

Looking back, I remember how my sister struggled often to make ends meet, or to have some spare vacation money.  The $34,700.00 would have gone a long way to make them a little more comfortable.