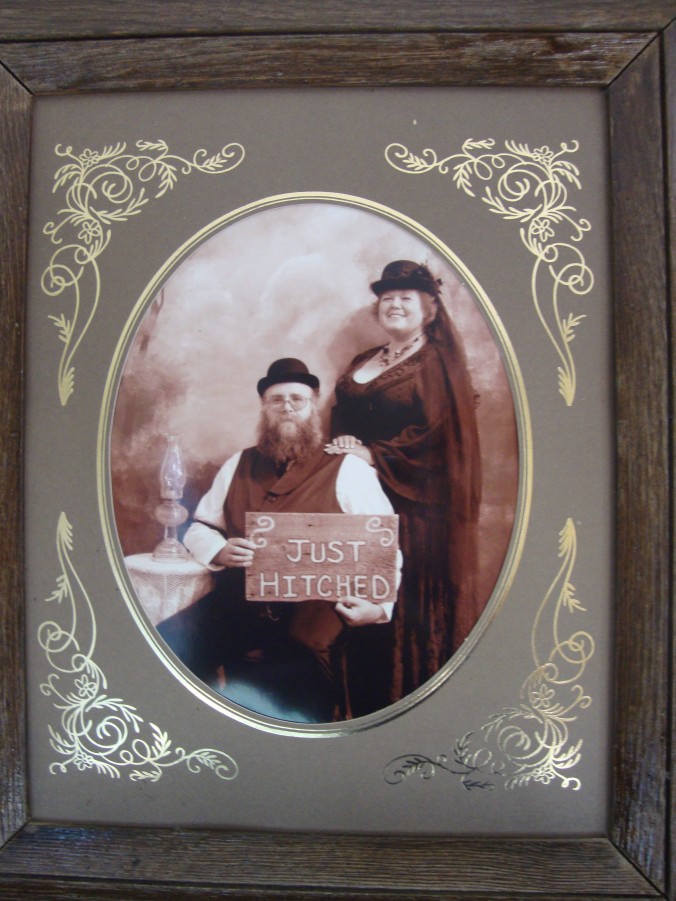 When Greg and I were planning our wedding, we wanted something a little different.  We also wanted it casual, relaxed, quirky, and fun.  We both come from a role-playing background, he with his assorted D20 games, and me, with my love of Renaissance Fair acting.  At the time, we were both interested in Steampunk, so we decided that would be our theme.

We were married by a Justice of the Peace, in Virginia City Nevada.  By a stroke of luck, we were able to get the acting hall of Piper’s Opera House for a nominal fee.  The only condition was that the hall would still be open for whatever museum visitor might be wandering through. We were fine with that.  The ceremony was going to be short, and we were going to have the following reception at a saloon, a couple of blocks away. So, we figured we had luck on our side for an uninterrupted service.

We figured wrong.  Virginia City is at the top of the Virginia Mountain Range.  While it’s only 26 miles from Reno, and 15 miles from Carson City, it is up hill both ways. Most of our guests were late due to construction on both of the roads leading into town.  My nephew was my hubby’s best man, and we had  others who were going to be our witnesses. They were held up in traffic with the rest of the guests. We ended up starting about 20 minutes late.  Our Justice kept looking at his watch.  I just figured that it was because he had other things he had to get to.  I was partly right. A big tour had been scheduled at the opera house 30 minutes after our ceremony was to be held.  Needless to say, we were in the middle of our vows when the tour came through.  The docent’s voice was carrying down the hall to where we were, way before the tour got there and our Justice of the Peace’s voice kept getting louder and louder so he could be heard  When the group got to the main room, they were greeting by a loud “shush” from several of the guests. They came to a dead stop and stayed silent until we were finished.  The group thought at first it was part of the tour but came over and congratulated us after when they were told it was a real wedding

We had a lot of fun that day.  It was not a perfect wedding by any stretch of the imagination, but it was perfect for us. We had a local bakery do our cake.  They hadn’t done a steampunk theme cake before. The decorating was a little bit weird and too brown, but the cake was delicious. We had our pictures taken at the Old Tyme Photo Shop, with Greg holding a “Just Hitched’ sign on his lap.

I had put together the costumes for our wedding attire. I had a darker blue dress with a black corset. The corset had black, sequined appliques, and various steam punk charms.  A black hat with blue veil, lace gloves and black boots (also decked up with assorted trinkets) completed the outfit. My bouquet had white roses, silver keys and peacock feathers wrapped in black and navy ribbons and lace.

Greg looked spiffy in his white shirt with garters on the sleeves, blue vest with chains, and a slightly too small hat with wings and keys on the headband.

Some of our guests dressed up too, and they looked awesome!

We don’t get a chance to dress up in costumes much these days. We’ve done a few fairs, but not much else.  So, when our good friend decided to have a Oscar Gala on her birthday, we couldn’t accept the invite fast enough.

Shortly thereafter though, reality set in. The criteria was either to go as your favorite movie character, or in “red carpet glam.”

I couldn’t think of a character, and there was nothing in my meager wardrobe that could be considered “glam.” I looked at the one good “fancy” dress I had and tried to figure out how to up it’s dressiness to get it red carpet worthy. It’s a navy jacket dress made out of chiffon. There is some beautiful tone on tone beading on both the jacket and the dress. It has sort of a 1920’s look to it, but it’s a classic that sort of transcends the decades. I bought it about five years ago for an evening wedding, and it cost a bit of change but I’m slowly getting my wear out of it.

As I thought about that 1920’s feel, an idea came to me. One of my favorite movies is Death on the Nile. I love mysteries and this one was done in such a fun way that I’ve seen it a bunch of times. My favorite actress has always been Angela Lansbury and in this movie, she played a debauched, romantic novelist, Salome Otterbourn, who always had a drink in her hand. In fact, she was stumbling drunk all the time. It was hilarious character, and that’s who I chose.

Costumes don’t have to be expensive to be fun.  I added a bunch of jewelry (silver bangles, long beaded necklaces, a long flowing scarf for my head accented by a rhinestone brooch, some black stockings, and my brown boots, painted black and some rhinestone buttons.  I made a fake book jacket of Otterbourn’s last novel, “Passion Under the Persimmon Tree” and covered a book we had.  I added false eyelashes ( or tried to), heavy “1920’s make-up and I was set.

Greg’s costume was sheer genus in its simplicity. One of his costumes for Renaissance Fair is a monk’s robe. So, Greg went as “the monk in the back” in Monty Python’s “Holy Grail.” All he needed along with the garment he already had, was a stick with some burlap attached to it.

That night, we had a great time. There is just something about role-playing that makes breaking the ice with new people so easier. Everyone had great costumes and we meet some really fun people.  It had been ages since we had “costumed up.”  I lost track of how many times people asked Greg about his costume and Greg had fun explaining how he was the smart monk because he carried the staff and not a board.  People unfamiliar with the movie were doing You Tube searches to figure out what he meant. Here’s a link if you need it. https://www.bing.com/videos/search?q=holy+grail+monk+scene&view=detail&mid=D464A8F39D47A2E6F65CD464A8F39D47A2E6F65C&FORM=VIRE  Anyway, it gave us a lot to talk about.

We’ll have to do it again soon, just for the fun and joy of it!